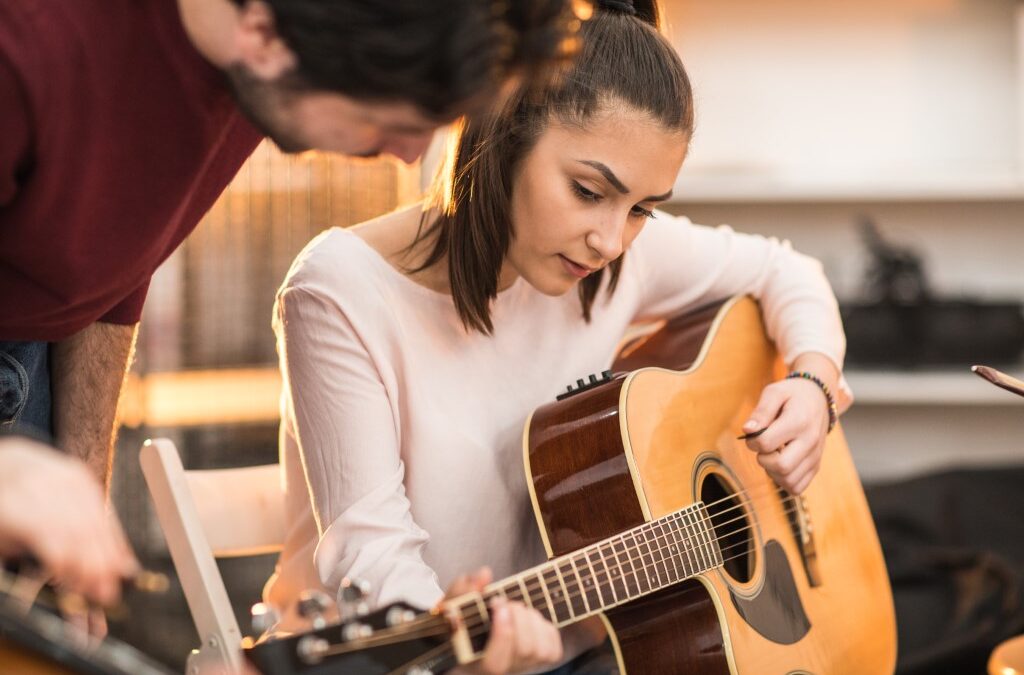 Hi, this is Andrea with Curtis Music Academy here with another awesome podcast about quotes about beginner guitar lessons in Tulsa. And I think in the last session I actually talked about another quote that I really love. This one is probably my favorite. But in this podcast, I want to talk about my second favorite quote about music. And it goes something like this. I’m paraphrasing here. And the quote goes, something to this effect that it would be a shame if the only bird that sings in the forest was the best.

And so it’s one of those quotes you have to pause and think about- whether you’re taking piano or beginner guitar lessons in Tulsa. Basically, what they’re saying is a lot of times we as humans put down ourselves and put down our talents, whether it’s singing or playing the guitar, playing the piano, and we say I’m not the best, so I’m just not going to perform. I’m not going to sing and think about what nature would be like if that was the case. If only the best bird won all of the pop artists songs of the year type thing. What if they’re the only ones that sang those birds in the forest?

What it would actually be kind of depressing because normally you want to hear all the birds chirping and it’s cheerful. It’s lovely. And so that’s the idea. And we can apply that to our musicianship as well, that you don’t have to be the best. And actually, that’s one of the things I think that steals joy out of students’ hearts when they feel like, well, I got to be the best, I have to be the best. First of all, it puts a pressure on them and it’s more striving rather than expression. This can apply to piano or beginner guitar lessons in Tulsa as well.

And second of all, I think expression should be the number one focus in beginner guitar lessons in Tulsa or piano lessons. We’re expressing a sound that maybe hasn’t been released in the earth yet. Maybe you’re creating something new or maybe you are playing a song that has been released on the earth, but you’re experiencing it as well. So every time you sing a song, whether it’s a creation of yours or creation of someone else’s, that you’re bringing that song to life and you’re making it a reality for the listeners.

So I just think that’s really important that we don’t see our talent that way, that we actually see our talent as a gift, no matter if you’re a level one or a level 10. So think about if we applied that same quote to other parts of nature, what if the only flowers that bloomed were considered the top ranking flowers? Well, we would have maybe one or two flowers in the whole world. And so you get the idea, what if the only horses alive were the ones that win awards? So basically, I just really feel like this topic of comparison really robs the joy out of musicians, whether in piano or beginner guitar lessons in Tulsa. And so it’s really important. On the other hand, we do want to keep growing and learning and honing our skills, but it doesn’t come from a place where I’m not enough. I need to keep going and going and going and driving yourself mad, basically.

But it’s from a place of joy and rest in peace. And ultimately, that is the goal is to just enjoy the journey and. It is so interesting to me that when we’re just strictly talking about skill level, sometimes people just want to be the best. And we have those works from Mozart, from Beethoven, and they were the best. And they wrote some really world shattering music in their day. It was awesome. And those are very difficult pieces. But I can think of very simple songs that in our day are more popular than those songs like I Can’t Help Falling in Love With You. That song is timeless and it’s just a simple, beautiful melody. It’s easy to sing. It’s easy to play on the piano. It’s easy to play on the guitar during beginner guitar lessons in Tulsa.

So it’s just so interesting how sometimes the most simple note, not that that song is simple, but sometimes simple songs release such beauty and mystery and love. That’s the Flight of the Bumblebee could never release. So keep that in mind, too. It’s not about the difficulty level. It’s not about being the best. It’s about falling in love with music and expressing it through who you are. The interesting thing is music is one thing and you as a vessel are another thing. And so when the music is released through you, it is a unique expression, even though that song might have been created for a different time and a different place. So that’s the cool part about playing music- whether piano or beginner guitar lessons in Tulsa.

So I encourage all students and all listeners out there to come back to a place of being in love with their instrument and playing for fun, whether during beginner guitar lessons in Tulsa or after. You might have to put some of your goals to the side and just really remember what it was like when you were learning and enjoying and having fun and just getting your feet wet in the instrument. And it just kind of reminds me one last story before the podcast is over. But I think I was in junior high and the school I went to always went to a camp for the first week of school. It was awesome and fun. And one of the teachers, as we were sitting there at night in our bunk beds, there were like twenty seven girls in this huge room. And this teacher just brought her guitar and started singing these beautiful songs and all the girls were singing with her.

It was just fine. And we would yell out requests and she would play them and we would sing. And I remember thinking I was so in love with the music and I have to learn how to play the guitar. It was just such like at that point in my life, it was like the biggest thing that I wanted to do. And, um, so it’s like those moments that really inspire us that that’s why I learned how to play the guitar. And there’s that love. And I’m not the world’s greatest guitar player. I really just play chords like campfire settings. But for me, that’s all I want to do is have fun, play and sing with other people that I know. So hopefully this motivates you to really enjoy playing and having fun during beginner guitar lessons in Tulsa. Thanks for tuning in for this podcast about guitar lessons.