Jazz Guitar Lessons in Tulsa | Get Smooth With Your Riffs 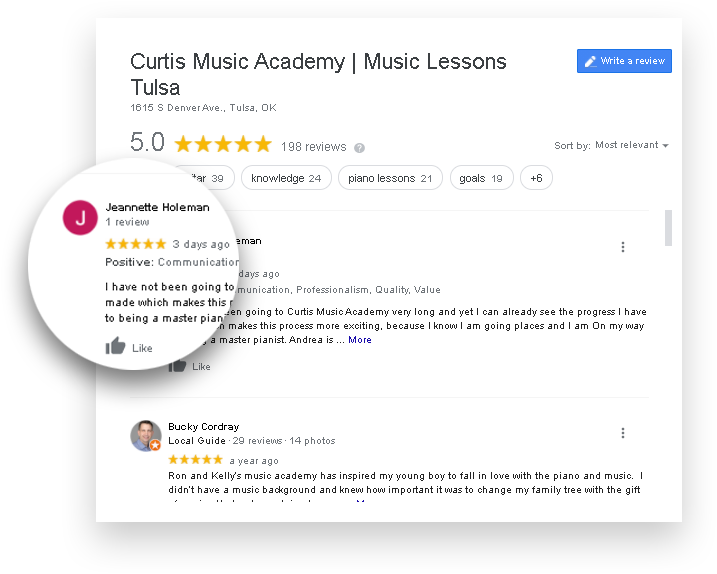 Playing with Passion in Jazz Guitar Lessons in Tulsa

Hi, this is Andrea with Curtis Music Academy, and I’m here with another podcast, just a little bit of a behind the scenes look at some of our philosophies at Curtis Music Academy. And one that is really important to me as a musician is playing with passion. So this applies if you’re a guitarist taking jazz guitar lessons in Tulsa, if you’re a pianist, if you’re a vocalist, if you are playing the kazoo, it all applies. Basically, what I have noticed and one thing I am pondering to myself as a music teacher is that when we teach students how to read music, they get it more in the idea of playing the right note versus playing the wrong notes.

Some people do this with just their emotion. But music should tell a story. Music should take the listener on a journey in an excitement, whatever that is. So about 10 years ago, I heard a quote and I have never forgotten it. And it’s actually so true. And it said, Music should make you homesick for something that you’ve never had. And I love that quote. I should look up who originated that quote, because I do believe it was, um, it was by somebody in particular. It wasn’t just a saying, but it is so true. I don’t know if you’re like me in the sense that maybe you’ve heard a song before and it just totally seems like the world stops moving and the song really speaks to you, whether in piano or jazz guitar lessons in Tulsa.

It speaks your spirit, it speaks to your soul. And that has happened to me on a number of occasions. And I’m sure it’s happened to you as a musician yourself, and I’m sure it’s happened to every single person on the Earth, because I do believe that music is a language that we all speak. And so that is so true. And that’s one of the biggest things that I want to use as a musician. I’m not just playing when somebody asks me to play the piano or the guitar during jazz guitar lessons in Tulsa, I don’t just want to play a song to show off my talent or to show off how right I am by finding the right notes. And I don’t want to play it in the sense of showing how fast I can move my fingers.

But I really want to tell a story. So what is my instrument communicating? Another thing that I’ve realized is you really have to become a friend of your instrument, whether that’s your piano, whether that’s your cello, whether that’s your guitar and jazz guitar lessons in Tulsa. But really and truly you should. I know this sounds weird, but you should have kind of a bond with your instrument. And I actually noticed that I was playing the cello this morning in a band, because I’m a part of a band. We meet weekly, we perform at a church, and it’s awesome. And I have just really come to get comfortable with the cello. I’m still kind of more at a beginning type of cellist, but I have grown to know the cello because of hours of practice.

And so because of that, I can make it sound certain ways. And honestly, I know this sounds weird, but it’s almost as if I’ve gotten to know it as a friend. And I started realizing the hours that I’ve put into it, the honor that I’ve brought into learning the cello. It’s really caused a connection with cellos in general. And now I’m really confident and comfortable to play it. And again, not to just play the right note, but to play it and express through it. So the question is, this always comes back around, but are you really putting in the time with your instrument to really develop that sense of love for the instrument? Like I realized this morning how much I loved my cello. Or if you are taking jazz guitar lessons in Tulsa, the same applies to the guitar.

And that’s another part of it. Developing a passion for your instrument as well, it’s actually like you enjoy just touching the piano, touching the keys, playing the songs. Or if you’re in jazz guitar lessons in Tulsa, you enjoy the physical guitar. And all of that is really important. You can’t really play with passion if you’re not really passionate about what you do. It can’t be faked, in other words. So I think that that’s another key that’s really important is just to get to know your instrument really well. So I think people should practice playing with passion. They should find songs that they like and now people who like a certain genre of music at Curtis Music Academy, we do our best to bring that kind of music in front of them all the time so that they’re really igniting a fire within them about playing the songs.

So that is really crucial to us as musicians taking piano and jazz guitar lessons in Tulsa, and to me personally, I don’t want to learn the piano just to learn songs that I don’t like. I think that that’s why sometimes students burn out and just give up on their instruments because they don’t really feel inspired to continue playing because they’re playing songs that they don’t enjoy, basically. And there’s ways around that as well, because ultimately, when you’re learning an instrument, you have to just put in the discipline.

You have to put in the time. You have to learn songs, usually out of a guitar lesson book that may not really you maybe you don’t identify with. But ultimately there are songs that as instructors we can keep putting in front of our students to help them develop a love for music. That is definitely our heart. At Curtis Music Academy. That’s what we’re all about, is helping students get to that point where they’re just on fire about their instrument, they’re on fire about music, and that they’re creating music and playing music. That takes the listener on a journey. Thanks for listening in to this podcast on jazz guitar lessons in Tulsa.