Local Music Lessons | Learn From Someone in Tulsa 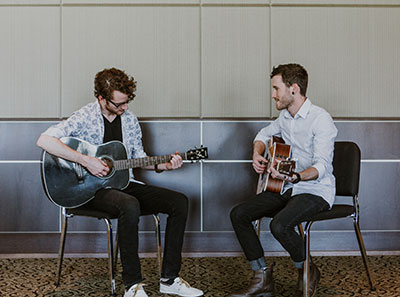 Start with Piano or Another Instrument and Local Music Lessons

Hi, guys, this is Andrea with Curtis Music Academy, and I’m here with another amazing podcast on questions that people might have when it comes to playing a certain instrument or starting lessons. Now, at Curtis Music Academy, we do offer piano lessons, we vocal lessons, and we offer guitar lessons and a variety of other local music lessons in Tulsa as well. So one thing I would like to talk about today is many parents wonder if they want their child to start off playing the piano or if they want their child to start off playing another instrument. And so I believe that music teachers in general will have a variety of opinions about this. So I will share my opinion about getting started with local music lessons in Tulsa.

So coming from teaching piano, it is one of the best ways to learn music because everything is laid out in order in front of you. So the keys are in order. It’s an easy way to learn how to sight read. It’s an easy way to learn, um, reading the grand stuff, which other instruments they might just have a certain part of the grand stuff like the treble clef or the bass class. So it is really good in that way. It’s just more all inclusive. It includes everything about music. And so a lot of music teachers insist that a child would take piano lessons before they take another kind of local music lesson, such as guitar or violin or things like that. And so a lot of people would agree with that.

Then there’s other people who would just say, no, let’s just start this child off, whether he’s four or five, let’s just start them straight learning the violin or guitar or just whatever. Um, and there are some really important reasons why people would want to do that, too. So let’s just take the violin, for instance, really professional people who are at an expert level at playing the violin, they usually start very young because their fingers are actually trained at a certain age to play the violin. I don’t know specifically about other instruments like that. I’m sure it’s the same, whether it’s saxophone or other band instruments or string instruments. I’m sure it’s the same concept when it comes to local music lessons in Tulsa well that the earlier you start, the better.

I know the violinist. If you want a child to become really professional musician, that they would have to start very young with local music lessons in Tulsa. It’s not it’s not impossible to start when you’re like seven or eight years old. But like, if someone is being trained specifically to become a very high level of violinist, they usually start extremely young. So in that case, I think it’s totally fine just to start off with your instrument, because usually the teacher would be able and be, well, knowledgeable enough to guide the students into understanding their instrument in a really great capacity. So I really, truly believe that either way will work. And it just really depends on the teacher.

Like if you have a teacher who’s just really skilled at what they do, it’ll be fantastic either way, whichever type of local music lessons in Tulsa they offer. Now we have a couple students who choose to do piano and another instrument that’s absolutely fine at Curtis Music Academy. We just pride ourselves in meeting the needs and the desires of our students and our students’ parents because many of our students are very young. And so sometimes if the child wants to play two instruments, we teach them. So I have a few students that I teach the piano and they also stick around for another local music lesson with the violin or with guitar or just whatever like that.

My only concern about starting local music lessons in Tulsa with them is just because I was a kid once and I know kids really well is that sometimes they want to do it all, which is a normal attribute of a child. But in reality, they don’t have enough time throughout the week to really harness and practice and really master their instrument. And so usually one or both instruments would fade away just because they’re a little overwhelmed. So if I had children, I probably wouldn’t dual enroll them, especially at the beginning. But it’s one thing if a child has been taking piano for four or five years and if they’re in their early teens and they want to learn a second instrument, that’s kind of another thing.

But to kind of start off a student age six or seven in. Two instruments, I just feel like that could get overwhelming again, we can do it and we do that at Curtis Music Academy. So it’s not like it’s against the rules, but those are just my thoughts about it. Another thing to speak about this same subject is what are the goals of the parents and the students? So sometimes parents I actually have a student who the mom said that the goal is to potentially offer the child a potential profession. And so this person has been really pursuing the piano. She practices very well. She’s in more of an advanced state for being I think she’s 11 or 12. And that is totally fine. Their goal is well defined before they ever started taking local music lessons in Tulsa.

And that’s different from a student whose goal is to just have a hobby. And so all of these things play into how many instruments should this person take and how seriously are they going to pursue it? How seriously are they going to practice? And should they start off with just the piano or should they start off with both instruments that they’re wanting to learn? I would say if they’re very casual and more just like a hobby and more just like something to do throughout the week, I would definitely recommend one. But like myself, that could open up to later on, a few years later, playing more than one instrument in local music lessons in Tulsa.

So anyway, I hope this helps maybe some potential parents that are kind of wondering the same thing, especially if you don’t have musical experience yourself. And it’s just kind of hard to navigate through some of those questions and different things like that. So thank you guys for tuning in to this podcast about local music lessons in Tulsa. And I hope you have a fabulous evening. We will see you at the next podcast discussing more about music.