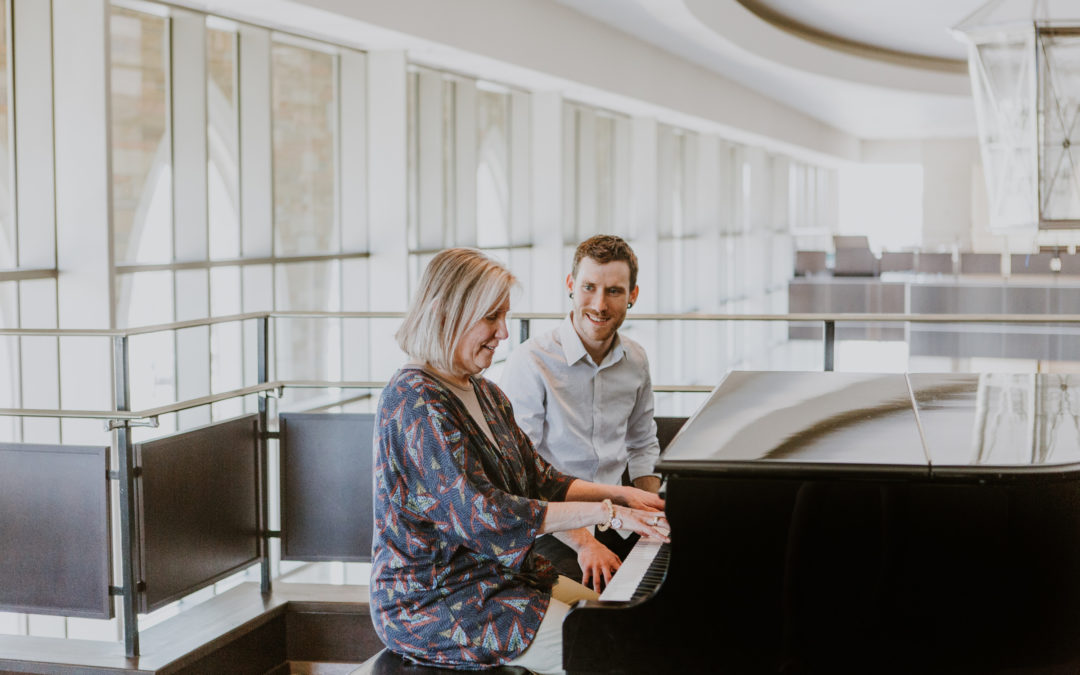 Hi, this is Andrea with Curtis Music Academy here with another podcast about local piano lessons in Oklahoma. In previous podcasts, I spoke a lot about guitar lessons, but this podcast will primarily be about piano lessons.This one in particular is about playing with the pedal. And so this applies to all pianists out there. So first of all, what is the pedal? So the pedal that I am referring to is the damper pedal, also known as the sustain pedal. There is not a similar pedal in guitar lessons, although guitars have a different type of pedal. And it is found obviously close to the floor. It’s a foot pedal and it’s on the right side. And so usually beginning pianists don’t mess with the pedal at first. But when you become an intermediate or advanced player, you play the pedal every single time you sit down at the piano even without thinking about it. So what does this damper pedal do?

Well, it sustains the sound when you’re taking local piano lessons in Oklahoma. It lifts up the dampers on each string inside the piano so that the sound is sustained. So literally you could sit down at the pedal, push down on the damper pedal and play a middle C and the sound would sustain for a long time. This makes songs sound so beautiful and the whole point is to connect the notes. So sometimes music sounds really choppy and you almost hear silence in between notes. But when you add in the damper pedal, there is no silence. There is no no nothing between the notes. It’s just connected. One notes to another.

And it’s one of the most beautiful sounds you could add to your local piano lessons in Oklahoma. And it makes it sound more full, which I really think gives a lot of presents and a lot of confidence, and it just makes it sound better in my opinion. So it does raise the dampers on the inside of the piano. That’s why it’s called the damper pedal. It’s also called the Sustain Pedal because it sustains the sound. So two names for it, but it does the same thing. So you might be asking, what are the other two pedals doing like the other two pedals? So sometimes there are two pedals on a piano, sometimes there are three pedals on the piano. And I remember once that I heard this joke and it actually kind of rings true. And this person said there is a damper pedal on the right.

When you are taking local piano lessons in Oklahoma, there is a soft pedal on the left, in the pedal in between just separates the two pedals, which is hilarious because I actually found that to be true all the way. Growing up, I grew up, I was classically trained on the piano, so I did things like competitions and different things like that. It was really fun. And I literally did not know what the middle pedal did until recently when I Googled it. And I guess just certain brands are different because it’s also considered a soft pedal. And so I would say, again, each piano is different, but the left pedal can be a soft pedal. The middle pedal can also be a soft pedal, just depending on the piano. Now there’s other types of piano that there’s just two pedals, a soft pedal and a damper pedal.

Why You Should Take Local Piano Lessons in Oklahoma

Now I like to play loud and proud, and so I almost never use the soft pedal on the piano. I always use the damper pedal. In fact, I might overuse the damper pedal, but every single time I sit down and play the piano, I am using the damper pedal. Why? Because it does make it sound smooth. It doesn’t make it sound together. It makes it sound like there’s more of a presence. So how would you play the damper pedal with a song? Oftentimes in sheet music, the pedal mark is written under the bass clef and so it shows you when you should be lifting up and when you should be pushing down. However, most people get to the point in their piano playing that they don’t even need that when you’re taking local piano lessons in Oklahoma.

And even if it’s written in, they might not follow it. They’ll just use the damper pedal instinctively. And that is the goal. That would be what I would want for my students is to be able to do that. And so basically, when you want to change chords, you’re going to want to lift up on the damper pedal, release the sound and then push right back down. And it is a start to get that flowing so that there’s no awkward silence in between. But sometimes what happens is people will play a C chord and then without lifting up the damper pedal, they’ll play a chord. And those notes actually clash with each other. And so the sound sounds very not too good.

And actually, it reminds me of one of my high school stories of playing the piano. I was playing for my music teacher and I finished the song and he said, it sounds like mud. And so that’s never good. No pianist wants to hear that. Basically, what he was saying was I was overusing the damper pedal in all of my notes running together and it wasn’t making a pretty sound, it was making a clashing sound. And so it’s kind of like art when you’re taking local piano lessons in Oklahoma. When you mix all the paint colors together, it makes a really ugly gray. Now, if you use red and let it dry in, then later on you use orange beside it and then yellow. It makes a beautiful painting. And so it’s the same with the damper pedal when used correctly, it makes music sound really beautiful, but if you overuse it, it just all runs together.

So one of the greatest exercises I use for teaching people how to use the damper pedal is this whole note during their local piano lesson in Oklahoma. And I think my students appreciate that because whole notes are easy in high notes are kind of like beginner things. So I have this exercise, I think of 16 measures and it starts off with a C chord note and it goes to a D minor chord. Whole note, E minor chord will note and on. You just keep following that idea up till the next C chord. And again, these are all using. Now you’re going to add in the pedal, but you’re going to lift up for each new measure. So what the pedal is doing, it’s doing up, down, hold, hold up, down, hold, hold up, down, hold, hold. And it’s following that pattern throughout the whole exercise. Now, it’s important to remember that while you’re doing the pedal, you’re also doing the right hand.

During your local piano lessons in Oklahoma, you’re doing up, down, move hand in while you’re moving your hand during the local piano lesson in Oklahoma. The foot pedal is holding until the very beginning of the next measure. So then you go up, down with the pedal and at the same time that you are putting the pedal up, you’re putting the notes down on the piano. This is one of those things it’s hard to describe in words, but when you’re at the piano, it makes sense. So the very moment that you’re pushing down on the keys, you’re actually lifting up on the pedal. That’s why it feels awkward. It’s because it kind of feels like you’re doing something opposite. So you’re pushing down on the keys at that very same moment. You’re lifting up with the pedal. But it’s important to do it at that moment.

Otherwise, your notes are going to bleed together and you’re going to make mud and nobody wants mud when playing in local piano lessons in Oklahoma. So it’s an up or down with the pedal. And at the same time, you’re doing the up, you’re pushing down on the keys. Up, down, move and up, down. Move your hand up, down, move. And so people do that exercise and it’s a little bit clunky at first because it’s kind of like learning to ride a bicycle and nobody well, I can’t say nobody, but most people don’t learn how to ride a bicycle their very first time. It takes practice. And that’s what I tell my students. Just keep after it for a few months and it’s going to be more normal. And people have come back. I’ve noticed my students after two or three months, they’re using the pedal comfortably and confidently, and it’s almost to the point where they don’t even think about it anymore.

They’re just using it. So that is the goal. And that’s how I describe myself as well. When I’m sitting down playing a song, it could even be a new song. I don’t even think about the pedal when I am taking local piano lessons in Oklahoma. It’s instinctive at this point because I’ve been playing for years. And so, yes, it is awkward at first. Yes, it’s uncomfortable at first, but put in the hard labors work and you will reap a lot of results. Another thing why it’s so difficult is because a lot of different parts of your body are doing a lot of different things. Your eyes are looking at the music, your right hand is playing something, your left hand is playing something different, and then the right foot of your pedal is also doing something different. So that makes it a little bit challenging during your local piano lessons in Oklahoma.

But this method, the damper pedal is used in classical music. It’s used in contemporary music. It’s used in blues and jazz. It’s used in every type of music. So it is one of the most important things to learn and to get used to. And it’s good just to slowly get used to it, like playing a song with the damper pedal down the whole time. We have a few songs in our piano or guitar lesson books that do that, just getting used to your foot, being down on the floor and extending. So those are some things that might help. So that is all about the damper pedal. It does sustain the sound in. There is a proper way to go about it. The understanding of a pedal can greatly aid guitar lessons as well. Thanks for listening to this podcasts on local piano lessons in Oklahoma. We will dive more into the subject of guitar lessons in our next session. Have a great day.